It’s time we got back out on tour, isn’t it? It’s been WAY too long – and this year has seen us do some amazing things, in different places all over the world – but it’s time to get back to the UK. In November, we’re celebrating thirty years (!!) of our debut album “Liquidizer”, and will be playing it in full (with lots of other stuff as well) at the following shows. 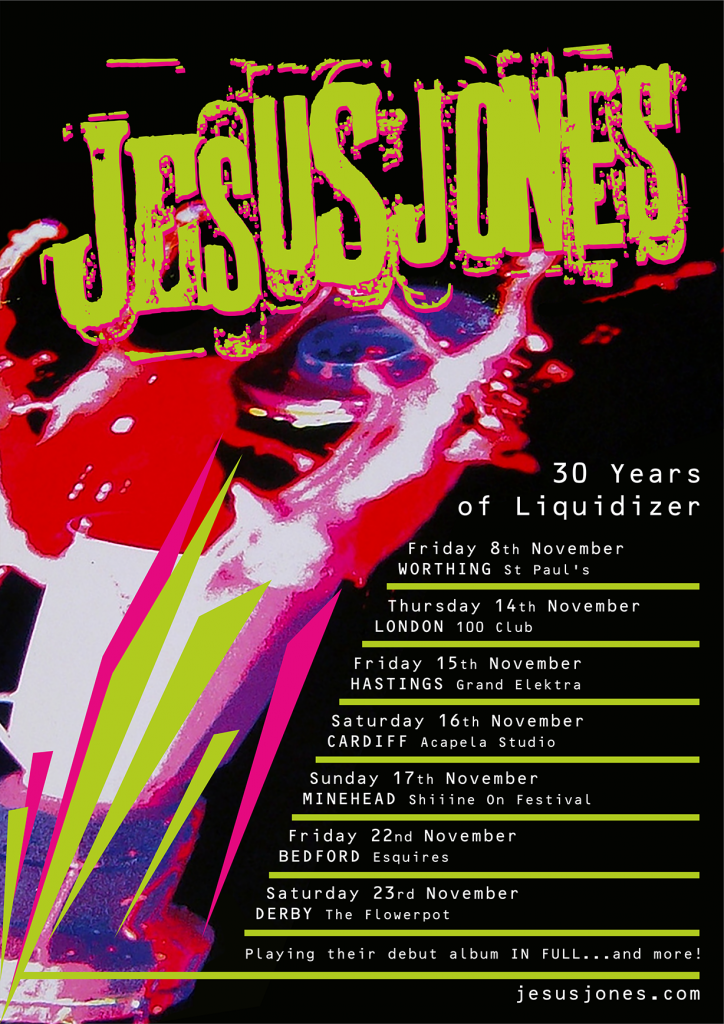 These are the dates we’ve got so far – it’s not inconceivable we could do others – but for now, this is how it looks. For those of you saying “damn, how come they’re not playing ____?” it’s worth pointing out, these are the dates we’ve been offered. It’s not our choice to select a list of places, we play the shows that people ask us to do. So, if your town, city, or area of the country isn’t represented – it’s because none of the local promotoers have offered us a show there, simple as that. If you’d like us to play near you, and you’re sure it would work – then put us in touch with someone who can put the show on!
Anyway – we’re looking forward to doing the album in full – we have done it onece before, at the Bull & Gate, but that was with TOny on drums, so this lineup hasn’t had a chance to do the whole thing. These songs were there right at the beginning of our career – they were the tunes we played as we went round the UK on our first ever tour – so they’re incredibly special to us. We’ll have lots of Liquidizer tees with us (in cas your original is looking a bit worse for wear after all these years) and more besides.

One of the things we do hope to have with us is the new Liquidizer update tracks. Mike has been listening to the album for a few years now – and has wondered what it would sound like, if today’s band recorded yesterday’s songs. We’re a lot tighter than twe ever were – and all of us are of the opinion that we’ve never played as good as we do now. So, we’ve always wondered – what if? So – we’ve decided to go ahead and do it. We’ve all gone into the studio, and reworked a batch of “Liquizer” originals. These are now in the process of getting remixed, and mastered, for release. We’ll keep you updated on how you can get them. PLUS, our new label – Razor & Tie – are also getting in on the act – they’re doing a 30th anniversary Liquidizer deluxe vinyl version – which will be a limited edition. More details on that as well, in the next update.

So – we’ll see you at the shows – and there will be more news, soon!

So, hopefully, you’ll have seen by now that we have reissued our Japanese-only compilation album “Scratched”, on vinyl, for the first time. It’s two pieces of heavyweight vinyl, marbled blue and yellow – so it matches the artwork. Speaking of artwork – we got the original designer Stylorouge to redo all of the design, and bring it up to date. It’s as faithful as we could have made it, to what came out in the 1990s. Totally chuffed with how it looks – and for those of you who have a copy – just look at it, it’s ace!